George and Charlotte arrived the Abbey by car with their mother and Camilla, Queen Consort.

Before entering, they were introduced to a member of the clergy, and Charlotte was spotted making a sweet comment towards him.

She gave him a cursty and said something that lip reader Jeremy Freeman has been able to depict.

Speaking to the Daily Star, Jeremy explained Charlotte had said: “Pleasured to meet you.”

Charlotte wore a black coat dress to the Queen’s funeral and a brooch shaped like a horse shoe (Image: GETTY ) 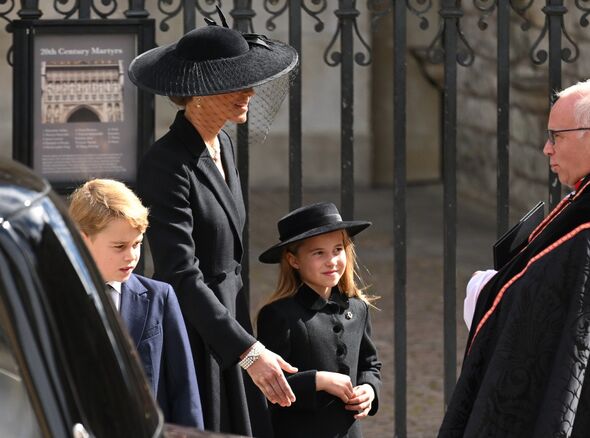 Charlotte was introduced to a member of the clergy (Image: GETTY )

George was equally as polite and said “good morning” to the member of the clergy, according to Jeremy.

The children looked smart in their mourning clothes – George dressed in a navy blue suit and Charlotte in a collared coat dress with tights.

She accessorised with a wide-brimmed hat and a brooch in the shape of a horse shoe.

This was a clear nod to the Queen as she loved horses. During her reign, she was happiest in the countryside surrounded by her horses and her dogs.

This was the first time Charlotte had worn a piece of jewellery out in public, and it was a fitting occasion to showcase her likely collection of accessories.

George and Charlotte attended the funeral today after days of speculation over their presence.

The decision for them to attend was made without “pressure”, a royal editor said, as the siblings were free to make their own choice.

The Sunday Times’ Royal Editor Roya Nikkhah said: “My understanding from William’s and Catherine’s team is that that decision was made yesterday. 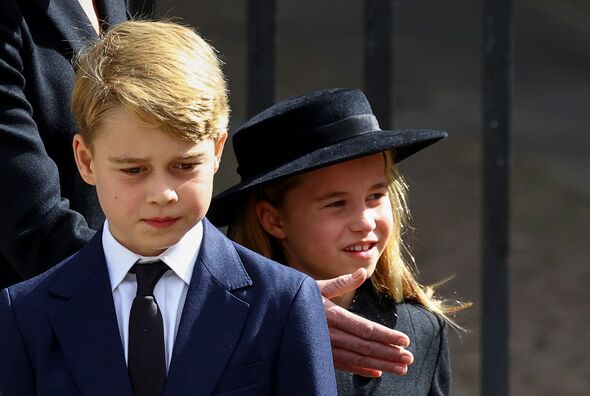 Charlotte and George were given the choice if they wanted to attend the Queen’s funeral or not (Image: GETTY )

“But it was really up to whether the children felt they wanted to be there.

“And I know that William and Catherine have been speaking to them a week.

“There has been no pressure at all despite the world wanting to see the symbolism of the future king George at his great-grandmother’s funeral.”

Ms Nikkhah continued: “There was no pressure. It was a call they made personally.” 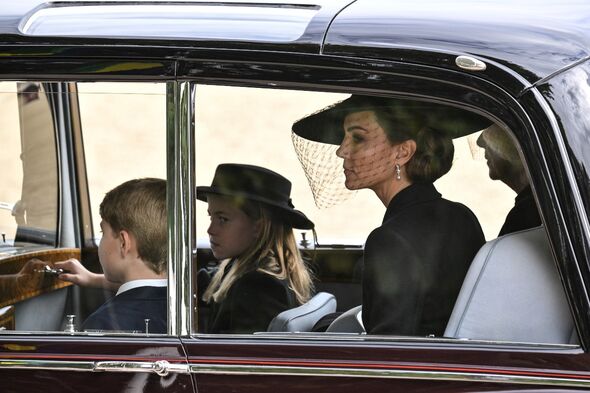 George and Charlotte arrived the Abbey by car with their mother and Camilla, Queen Consort (Image: GETTY )

After taking their seats inside Westminster Abbey, George and Charlotte were seen studying their order of service at various points. Charlotte looked around from under the brim of her hat while the mourners sang The Lord’s My Shepherd.

Her brother was seen singing The Day Thou Gavest, Lord, Is Ended as he stood between his parents.

At the end of the service, George followed closely behind his father, while Kate put a guiding hand on the back of her daughter, as the foursome got up from their seats and stood behind the coffin. Both children looked down at times as they filed slowly out of the Abbey.

They later stood with their mother Kate, Meghan, Camilla and the Countess of Wessex, watching as the Queen’s coffin began its final journey from Westminster. When the coffin reached Wellington Arch, it was transferred to the state hearse to be driven to Windsor, with senior royals watching at the side.