Mr Myers explained that the British public can expect to see the Prince and Princess of Wales to be travelling more as they take over King Charles and Queen Consort Camilla’s responsibilities. Earlier this month King Charles gave the royal couple new titles as he became the new Monarch. Mr Myers also claimed that Prince William and Kate would not be the only royals taking on more responsibility as Prince Edward and Sophie, Duchess of Wessex would also be brought more to the forefront. A trip to America has already been announced for the royal couple who are set to head there in just a few short months.

Mr Myers told Lorraine: “So it’s really up to the new Prince and Princess of Wales Wliiam and Kate and him and Camilla.

“And I think they’ve got their work cut out because they’ve go to really go on a lot of travels.

“They’ve got to really take over, especially William and Kate, they’ve got to take over a lot of the charities that Charles has sort of leftover now that he’s the Monarch.

“But I think we’re going to see a lot more collaboration.

Mr Myers added: “We’re going to see a bit more of Edward, Sophie I think people have really resonated with the fact that Sophie has sort of coming to the fore.

Ms Kelly added: “They kind of did all of the boring jobs didn’t they, God love them, but they did, they really did like Princess Anne.”

Mr Myers said: “But hard workers as well and people have seen that, so I think we’re in a really interesting time for the Monarchy, and I think they’re going to need all the luck they can get really.”

Royal commentators have been claiming that the royal couple had been preparing to take on more responsibility in the Royal Family since the beginning of this year.

The Cambridges moved to Adelaide Cottage earlier this year to be closer to the Queen before her passing this month.

Part of their new role will involve more travelling, and Prince William and Kate have just announced that they will be travelling to Wales and America in the months.

Royal editors have been discussing what the couple’s new focus will be on as senior members of the Royal Family. 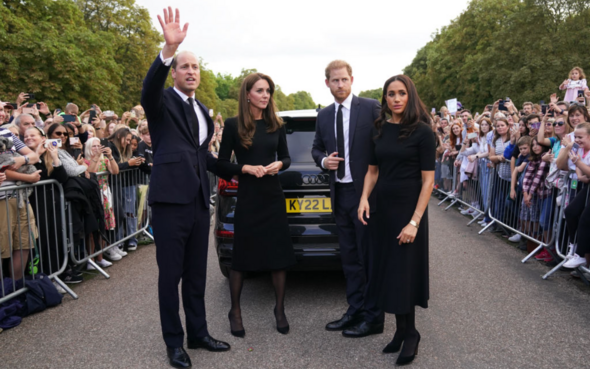 The Prince and Princess of Wales, Duke and Duchess of Sussex (Image: Getty)

Roya Nikkah, Royal Editor for the Sunday Times, quotes the source as saying: “The couple are focussed on deepening the trust and respect of the people of Wales over time.

“The Prince and Princess of Wales will approach their roles in the modest and humble way they’ve approached their work previously.

“The new Princess of Wales appreciates the history associated with this role but will understandably want to look to the future as she creates her own path.”