Kate revealed in an interview on the Happy Mum, Happy Baby podcast what George, eight, and Charlotte, seven, have asked her before leaving them to carry out a royal visit. Asked by presenter Giovanna Fletcher if she struggles with mum-guilt, Kate said: “Yes, absolutely. I think anyone who doesn’t as a mother is actually lying. Yes, all the time.

“Even this morning before I went on the nursery visit, George and Charlotte said, ‘Mummy, how can you possibly not drop us off at school this morning?’. No, [Mum-guilt is] a constant challenge.

“You hear it time and time again from mums. You’re always questioning your own decisions and your own judgements. I think that starts from the moment you have a baby.

“I feel huge responsibility. What I’ve learnt over the last few years is so fascinating and I definitely would have done things differently, even during my pregnancy, than I would have done now, knowing the importance of the early years.”

While there is a personal element to Kate’s work, given the fact that she is mother to George, Charlotte and Louis, aged four, her concern over the impact of early childhood on adulthood has been an interest for some time. 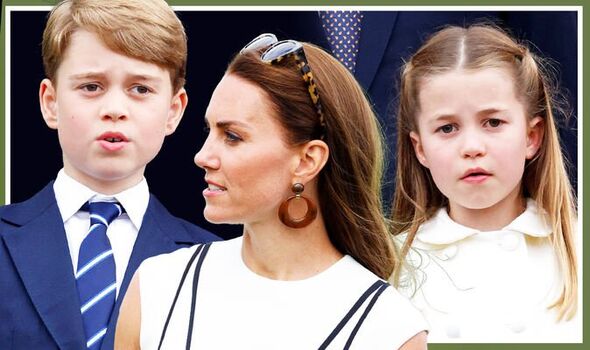 The Duchess of Cambridge revealed what George and Charlotte said before she went on a royal visit (Image: Getty) 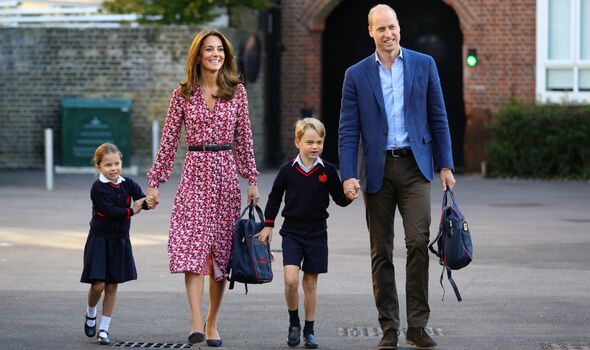 Princess Charlotte arrives for her first day of school, with Prince George and her parents (Image: Getty)

The Duchess told the podcast: “What we experience in our childhood really has a life-long impact on our future health and happiness. That has really driven my interest in the early years landscape.”

In June 2021, Kate launched The Royal Foundation Centre for Early Childhood in June last year in a bid to raise awareness of the impact of the early years.

Kate’s interest started more than 10 years ago when she met people rebuilding their lives after family breakdown and poor mental health.

The Duchess, speaking about her own parenting and how she was raised, said: “I had a very happy childhood. I am very lucky I come from a very strong family. 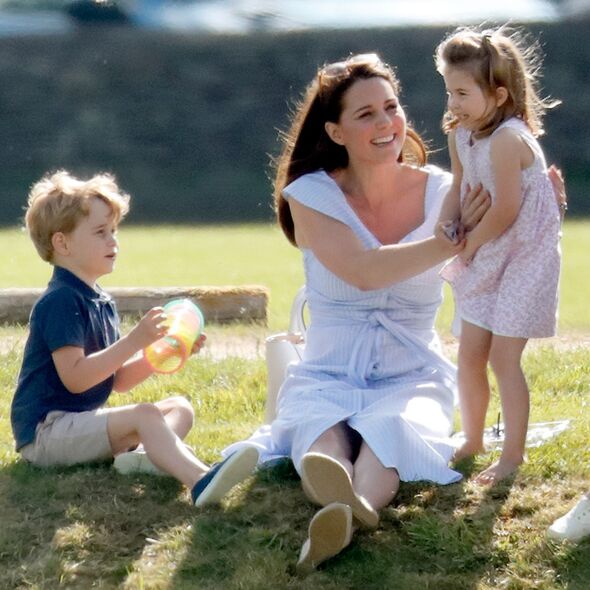 The Cambridges on the balcony of Buckingham Palace (Image: Getty)

“My parents were hugely dedicated to us, my siblings. I really appreciate now, as a parent, how much they sacrificed for us.

“They came to every sports match. We’d always have our family holidays together. The things that really resonate with me are the simple things. I see that even now with my own children.

“Life now is so busy, so distracting. And actually, sometimes the simple things like watching a fire on a really rainy day provides such enjoyment. It totally strips away all the pressures.”

Kate told the podcast when she suffered very bad morning sickness during all three of her pregnancies.

She said: “I’m not the happiest of pregnant people… Lots of people have it far, far worse. But it was definitely a challenge, not just for me but also for your loved ones around you.

“It’s hard for everyone to see you suffering without being able to do anything about it.”

Kate revealed in the podcast she had hypnobirthing which aims to reduce fear, pain and anxiety in childbirth.

She told the podcast, which first aired in January: “I realised this was something I could take control of during labour. It was hugely powerful. 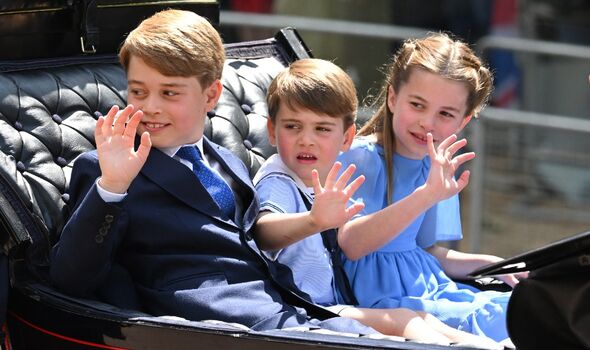 George, Louis and Charlotte in the carriage procession at Trooping the Colour (Image: Getty)

“And actually because it had been so bad during pregnancy I actually really quite liked labour because it was an event I knew there was going to be an ending to. But it’s not for everybody.”

The Duchess of Cambridge hosted a round-table event in June on the importance of early childhood development and its links to mental health.

Alongside The Royal Foundation Centre for Early Childhood, she met then Health Secretary Sajid Javid, then families minister Will Quince, representatives from the early years sector and officials from the Department for Education and the Department of Health and Social Care.

The discussion was focused on findings by the centre showing nine in 10 agree early years are important in shaping children’s lives, although less than a fifth recognise the unique importance of children’s development from birth to the age of five.

Kate said: “Our experiences in early childhood fundamentally impact our whole life and set the foundation for how we go on to thrive as individuals, with one another, as a community and as a society.

“The findings… present us with a huge opportunity and demonstrate there is real appetite from the public to bring this issue up all of our agendas.

“There is more we can all do – every member of society can play a key role, whether that is directly with a child or by investing in the adults around them – the parents, the carers, the early years workforce and more.”