THE QUEEN has been warned she cannot have a “Harry and Meghan sideshow” at her Platinum Jubilee celebrations because it would create resentment among other Royal Family members.

She said it was important next month’s celebrations were about the Queen.

Speaking to The Telegraph: “You can include the Sussexes, but you don’t want some sort of Harry and Meghan side show going on when the main event must be HMQ the Queen and equally there will be other members of the Royal Family who are still doing the daily grind who will resent being overshadowed by Harry and Meghan even if they don’t admit it.

“You’re not going to want to have the likes of Princess Anne and the Earl and Countess of Wessex for instance who day in day out plant trees, unveil plaques and go to the openings of royal envelopes only to have the media completely focus on Harry and Meghan who aren’t playing a role at all in the so called family.”

Her comments come ahead of the Queen’s Platinum Jubilee, taking place from June 2 to June 5, which Harry and Meghan said they were “excited and honoured” to attend.

But the pair will not join the Queen on the balcony of Buckingham Palace because that privilege is only reserved for working members of the Firm.

This will be the first time the Queen meets Prince Harry’s daughter, Lilibet Diana. 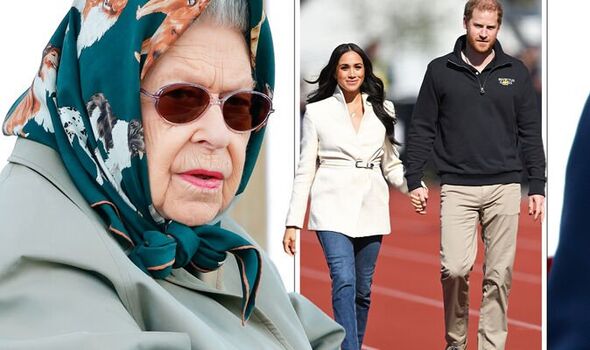 Follow below for LIVE updates on the Royal Family (Image: Getty)

‘Most Americans don’t care!’ Meghan and Harry ‘not much of a story’ without Royal Family

Meghan Markle and Prince Harry are “not much of a story” without the Royal Family according to a royal author who claims Netflix will want to cash in on the couple’s “inner connection” with the Firm for upcoming projects.

The Duke and Duchess of Sussex are returning to the UK early next month to attend celebrations for the Queen’s Platinum Jubilee.

The couple said they were “excited and honoured” to be attending the celebrations.

However, the Sussex family have been omitted from the Trooping the Colour balcony appearance by the Queen.

The monarch said only working members of the Royal Family will join her on Buckingham Palace’s balcony for the traditional RAF flypast.

This was a decision made “after careful consideration” a palace statement said.