The Duke of York’s central role in escorting the Queen to the Duke of Edinburgh’s memorial service has raised the prospect of Andrew putting in an appearance during the Platinum Jubilee weekend. The disgraced royal accompanied the monarch to her seat in a shock move in Westminster Abbey. Royal biographer Tina Brown has since claimed Andrew forced he “pushed his way in”.

Speaking to 60 Minutes Australia, Ms Brown claimed: “Nobody was happy to see him at her side at that service.

“But I’m also told that he pushed his way in.

“He wasn’t supposed to be walking down the aisle with her. 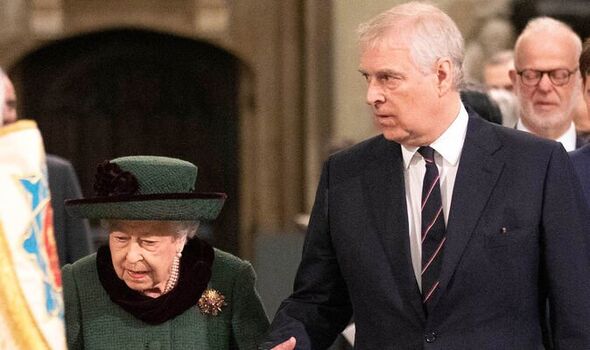 The Queen was supposed to be “handed off” from Prince Andrew to the Dean of Windsor (Image: GETTY) 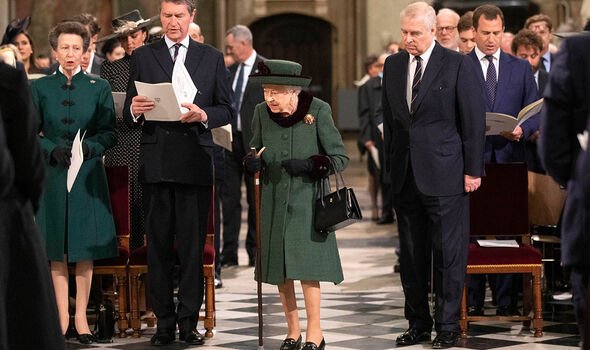 “But when a Queen’s son elbows his way into the shot, no one’s going to have a scene in the middle of a memorial service.

“It was a source of great anxiety and sorrow to the family and I think to everyone.

Andrew had been banished from royal life, first bowing out of royal duties in 2019 after his disastrous Newsnight appearance over his friendship with convicted paedophile Jeffrey Epstein.

This January, Andrew was stripped of his honorary military titles and patronages by the Queen and forced to relinquish using his HRH style amid his legal battle.

Virginia Giuffre was suing him for allegedly sexually assaulting her when she was 17 after being trafficked by Epstein, claims he always denied.

At the time, Buckingham Palace said: “The Duke of York will continue not to undertake any public duties and is defending this case as a private citizen.”

Andrew was front and centre of Philip’s official memorial service, with his mother holding onto his elbow as they made their way via the shortest route into the Abbey to remember Philip.

At the Jubilee service of thanksgiving in St Paul’s Cathedral on June 3 is considered to be a family occasion, Andrew could be among the congregation, alongside other non-working royals.

Royal expert Joe Little, of Majesty magazine, suggested: “I think he will be there.

“Although the Queen is head of state, she is also head of the family as well and in that capacity, all her children should be with her.”

He added the Royal Family may take stock following the media’s response to Andrew’s role in Philip’s service.