The princess began to cry as she looked at the Queen holding onto Prince Andrew’s arm. Beatrice and her sister Eugenie attended the memorial with their husbands Edoardo Mapelli Mozzi and Jack Brooksbank. Beatrice and Eugenie joined several other Royal Family members to honour their great grandfather during the service at Westminster Abbey on Tuesday.

They were in attendance with senior royals including Prince Charles; Prince William; Kate, Duchess of Cambridge; Prince Edward and their father Prince Andrew.

A small crowd gathered outside Westminster Abbey in central London, ahead of the service of thanksgiving for the life of the Duke of Edinburgh.

About 50 people congregated beside barriers near the entrance to the Abbey in an attempt to catch a glimpse of royal family members making their way inside.

The Queen remembered her husband of 73 years at the ceremony, which was attended by more than 20 close relatives including the Prince of Wales, the Duchess of Cornwall and the Cambridges. 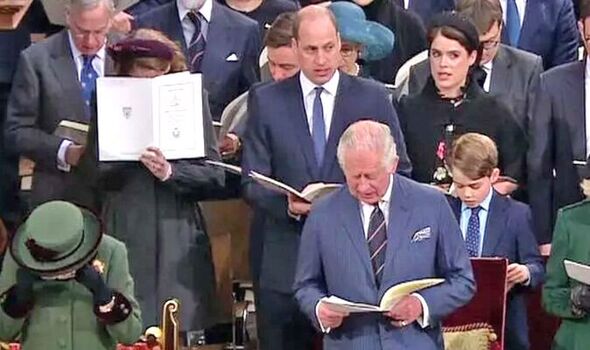 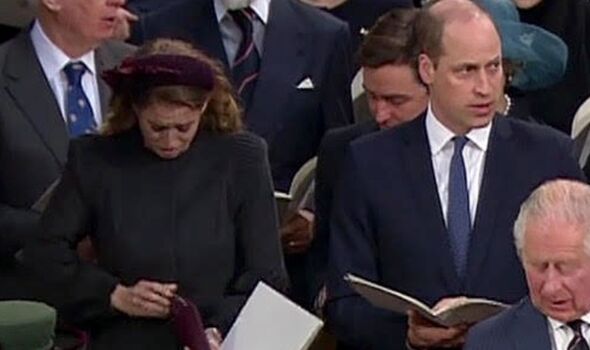 Beatrice and Eugenie are known as Princesses, despite being non-working members of the Royal Family.

But according to a royal historian, Lady titles were “vetoed” for the York sisters, while the title was agreed for Lady Louise Windsor when she was born in 2003.

Only 30 mourners were able to attend Philip’s funeral service due to strict coronavirus rules, which meant the queen poignantly sat alone as her husband of 73 years was lowered into the Royal Vault of St George’s Chapel of the castle.

Tuesday’s service of thanksgiving at Westminster Abbey was a much bigger event, with Buckingham Palace saying the 95-year-old queen had been actively involved in its planning.

The monarch herself has been forced to cut back on her duties since she spent a night in hospital last October for an unspecified illness and was advised to rest, and there have been concerns about her health after she cancelled a number of planned engagements since then. 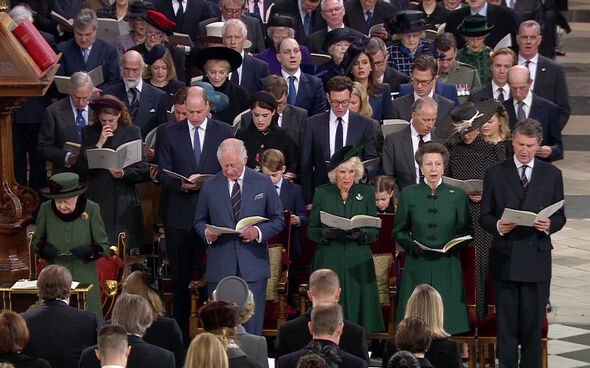 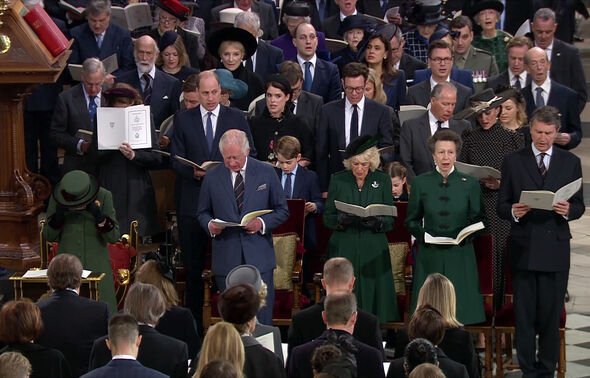 Beatrice covers her face during the service (Image: Pixel8000)

The Duke of York took centre stage at the memorial, accompanying the Queen to the poignant occasion.

Andrew travelled with his mother by car from Windsor Castle to Westminster Abbey.

The decision came despite the Duke paying millions out of court earlier this month to settle a civil sexual assault case in the US.

It will be seen as a major signal of support from the monarch to her second son. 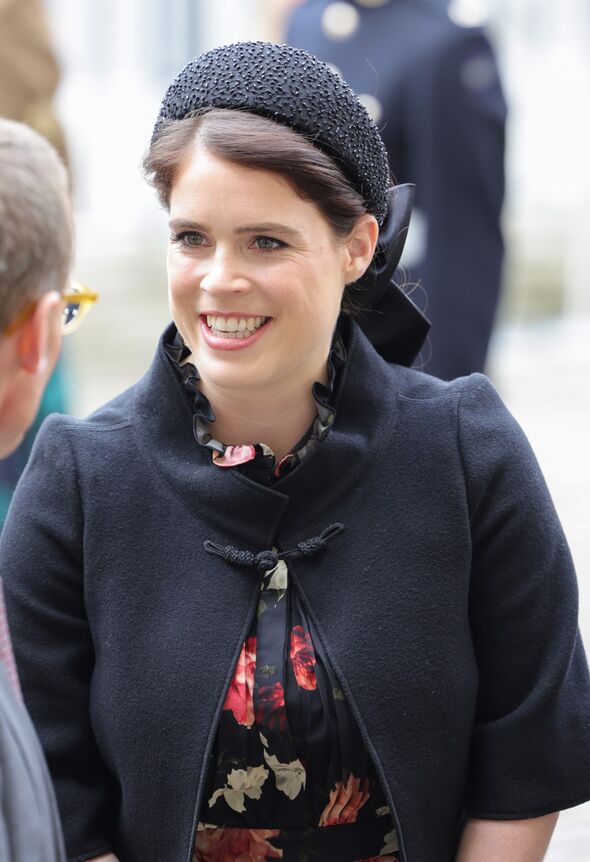 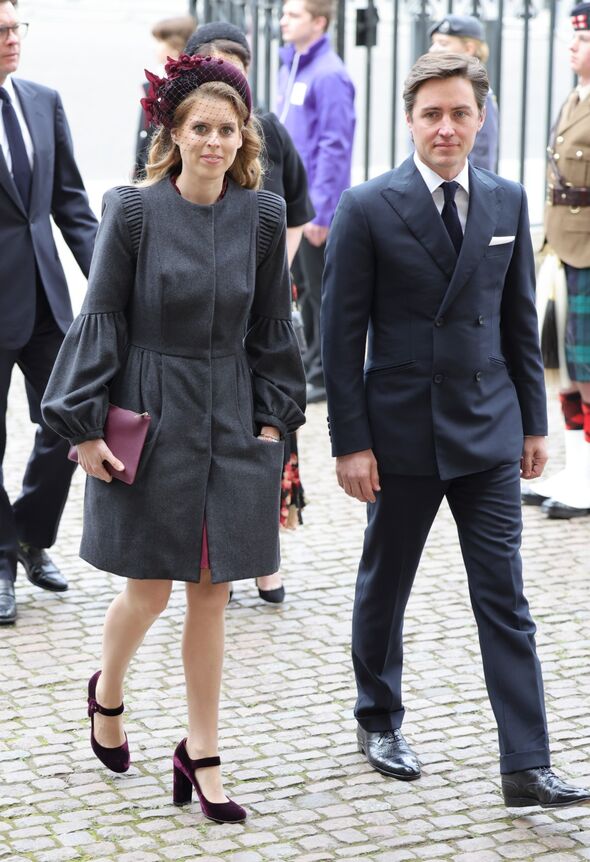 The duke, who stepped down from public life over his friendship with convicted paedophile Jeffrey Epstein, had a front row seat in the Abbey, sitting close to his other siblings.

On his left was his brother, the Earl of Wessex and Edward’s family, the Countess of Wessex and their children, Lady Louise Windsor and James, Viscount Severn.

Across the aisle on his right sat the Princess Royal, Vice Admiral Sir Tim Laurence, the Duchess of Cornwall, the Princes of Wales and the Queen.

Prince George and Princess Charlotte also attended with their parents, the Duke and Duchess of Cambridge, sitting behind the Queen. 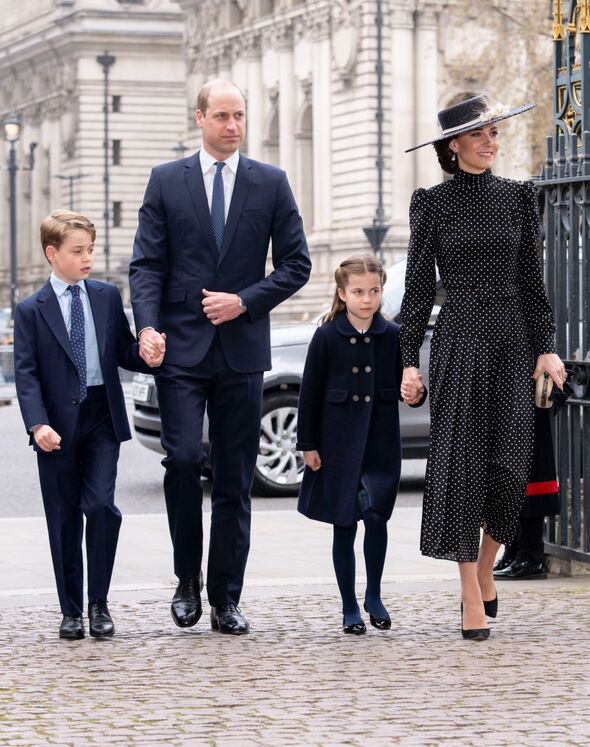 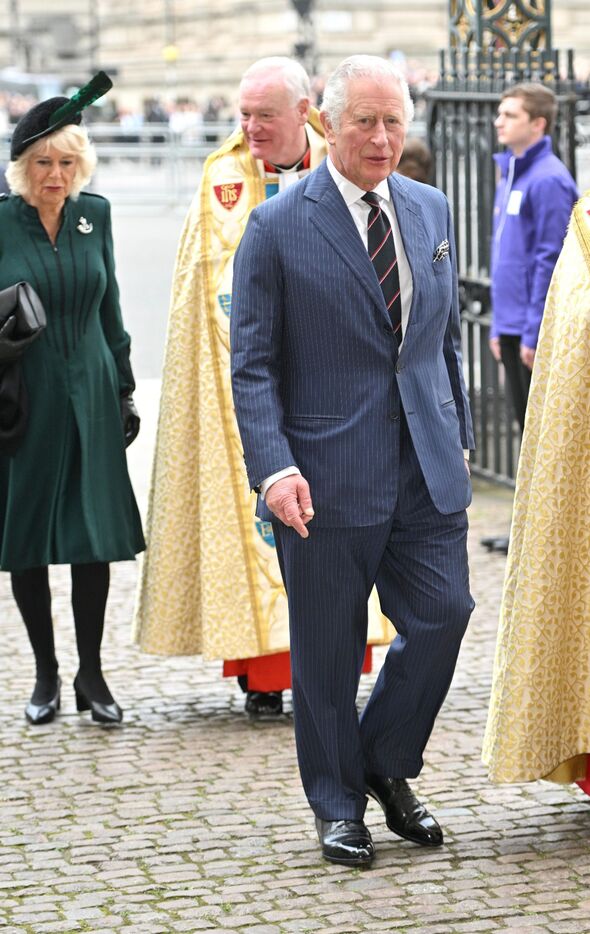 Prince Charles and Camilla arrive for the service (Image: Getty)

Behind Andrew and Edward’s family were Peter Phillips, and Zara and Mike Tindall and their daughters.

Once inside Westminster Abbey, Princesses Beatrice and Eugenie and their husbands smiled at members of the Abbey’s chapter, or governing body, standing by the great West Door, as they walked in.

The Earl and Countess of Wessex and their children also smiled warmly at the welcoming clergy. 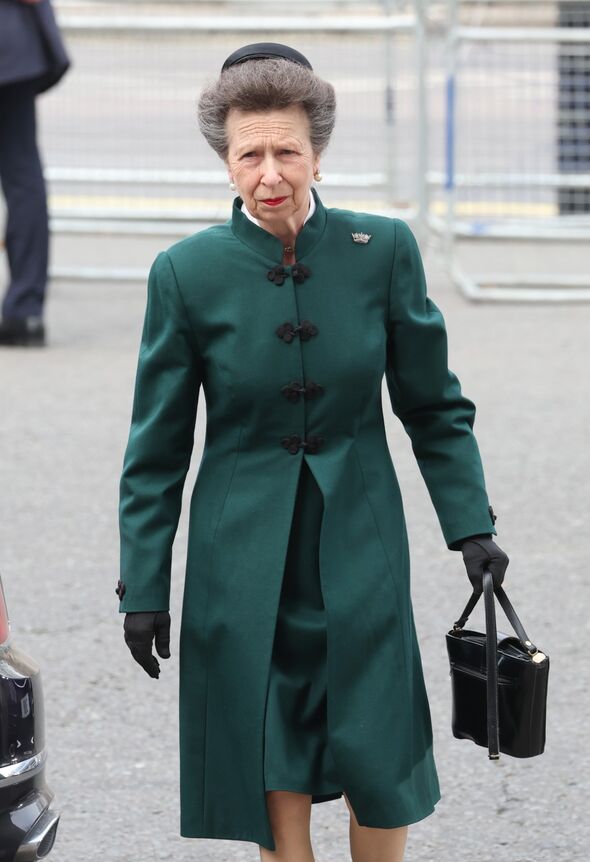 Sophie, Countess of Wessex, arrives for the memorial (Image: Getty)

Prince George and Princess Charlotte made a rare public appearance in honour of their great-grandfather, the Duke of Edinburgh.

The eight-year-old future king and his six-year-old sister joined their parents, the Duke and Duchess of Cambridge, at the memorial service .

The occasion gave the youngest generation of royals the chance to remember their much-loved great-grandfather, after they were unable to attend his funeral due to Covid restrictions.

George – who will one day be monarch – and Charlotte’s appearance marked a key moment in their public lives, being the first major televised church service they have attended. 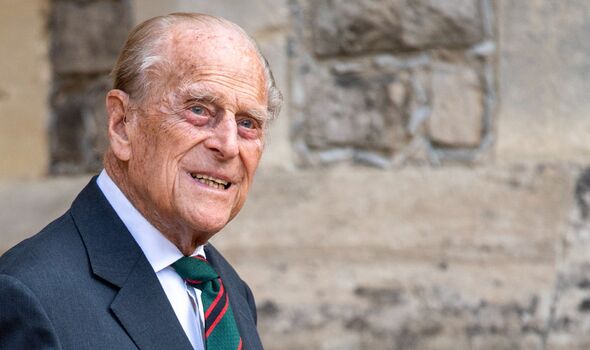 The Queen, the Duchess of Cornwall and the Princess Royal were all dressed in dark green.

It was seemingly a subtle tribute to Philip, whose livery colour was Edinburgh Green

A number of others throughout the congregation also wore the shade, including Duke of Edinburgh Gold Award holder Doyin Sonibare who delivered a special tribute about the effect Philip’s youth scheme had on her life.

Philip, who was by his wife’s side for more than seven decades, passed away at their Windsor Castle home in April, two months shy of his 100th birthday.