Skip to content
The Duchess of Cambridge has contributed to changes in royal tradition over the past few years.

Taking after her late mother-in-law, Princess Diana, Kate has altered how things are done within the Royal Family in multiple different ways, including through her choice of clothing.

Like Diana, Kate has opted to wear jeans and more casualwear to some royal engagements, which was not done as regularly a decade ago.

More recently, the Duchess has also started taking her coat off when inside establishments. 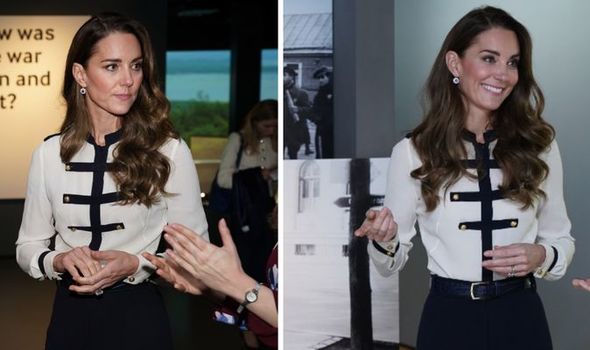 Kate broke royal protocol earlier this month by taking off her coat inside a museum (Image: GETTY )

According to fashion and royal experts, this is not the done thing for members of the Royal Family to do during public engagements and appearances.

Royals usually keep their whole outfit on, including their coat, throughout the engagement – even if indoors.

However, the Duchess of Cambridge took her coat off when she visited London’s Imperial War Museum earlier this month.

Kate donned a black and white military-style top with a pair of black trousers underneath a long, navy blue coat.

She finished the look with a black crocodile-embossed belt featuring a gold buckle.

The buttons on her top were also gold.

Once inside the museum, Kate took off her coat, allowing fans to see her top more clearly.

It had long sleeves and featured small gold buttons around the cuffs.

Kate was wearing a navy blue coat but took it off once she was inside (Image: GETTY )

Royal and fashion experts were quick to comment on Kate’s disrobing of her coat, including author and fashion commentator Elizabeth Holmes.

The writer of HRH: So Many Thoughts on Royal Style said on Instagram: “Once inside [the Imperial War Museum], Kate took off her coat.

“Which should not be a big deal, it’s a very common thing for everyone everywhere to do.

“But this is the Royal Family we are talking about, and they don’t typically ‘disrobe’ (aka take off their coats) in public.”

Elizabeth added that seeing Kate without her coat “made me happy” because the royal protocol “always felt like such an old-fashioned and uncomfortable thing”.

This is also personal stylist Samantha Harman’s opinion, and she told Express.co.uk: “Kate is supposed to keep her coat on indoors because of royal protocol.

“This rule is often attributed to the Queen who apparently deems taking off your coat in front of the public ‘unladylike’, although there isn’t any clear evidence on this.

“Even when Prince William is wearing a jumper or cardigan, the Duchess would still be in her coat.

“In 2021 this kind of thing comes across as old-fashioned.

“Why one rule for women and another for men?”

Samantha added: “Kate taking her coat off is a subtle way of saying ‘I’m human just like everyone else’ and also, ‘I’m ready to be in charge now’.”