The Duchess of Cambridge, 39, returned from her summer break this week with a visit to RAF Brize Norton in Oxfordshire. There, she met a number of service personnel who supported the evacuation of civilians from Afghanistan after the country fell to the Taliban. This comes after her and Prince William’s children Prince George, eight, Princess Charlotte, six, and Prince Louis, three, went back to school last week.

Such engagements have become the norm for Kate since she tied the knot with William at Westminster Abbey a decade ago.

However, the Duchess was not always so seemingly at ease with being in the spotlight.

Tonight Channel 5 airs a documentary entitled ‘William & Kate: Too Good To Be True’ detailing the couple’s journey up to this point.

It will examine William’s lifelong preparation for his role as King and how public attitudes to the couple have shifted over the years.

Previously, royal commentators have pointed out that, while Kate now seems like a queen-in-waiting, she was once a nervous young woman finding her feet. 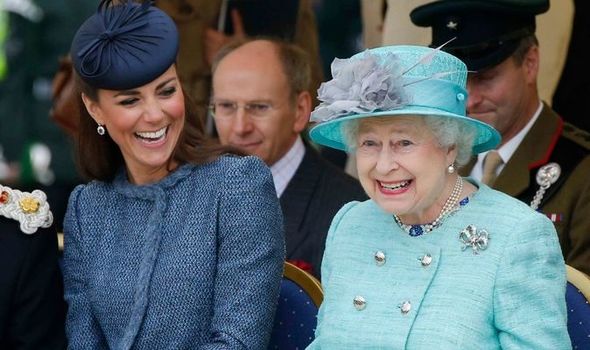 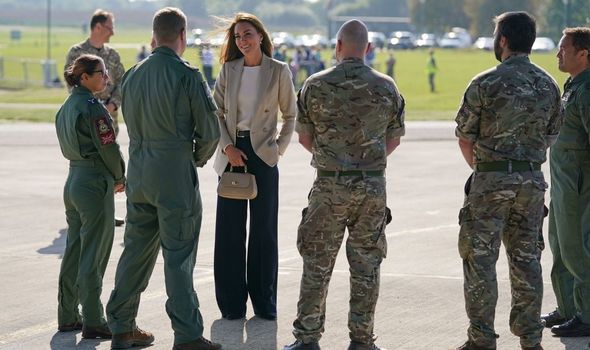 Body language expert Judi James spoke to Femail in 2019 about Kate’s transformation in the space of a few years.

She said the Duchess had appeared “anxious” during her first state banquet with the Queen in 2015.

The dinner had welcomed esteemed guests including Chinese president Xi Jinping and his wife Peng Liyuan.

However, Kate’s facial expressions and her fidgeting with her hands showed that she was nervous at the big occasion, according to Ms James.

The expert compared pictures of the night to those taken of a more confident display from the Duchess at a diplomatic reception hosted by the Queen at Buckingham Palace in 2019.

Speaking the day after that event, Ms James said: “Because Kate’s body language is always immaculate it’s easy to imagine that little has changed over the years.

“But these two sets of images, taken from her first state banquet and then this latest one, prove there have been some dramatic changes in her body language tone and ‘mood music’ at identical events.

“The first and perhaps the most dramatic change is in her status signals.

“At the 2015 banquet Kate adopted the role of a rather anxious-looking guest.

Kate and William: Royal couple at the Euros (Image: GETTY)

“Last night though her signals put her firmly in a hosting role, making her appear not just like a future Queen, but almost as a current one.

“She greets guests comfortably, leaning out to them and engaging them in relaxed, animated-looking conversations.”

Ms James said Kate’s “active listening signals, like her strong eye-engage” and a “raised brow” were used to “signal humour and interest”.

Along with her “symmetric, dimpled smile”, the signs suggest Kate has “learnt the skills of the kind of royal charisma that the Queen herself excels in”, the expert added.

For the 2019 event Kate wore the late Princess Diana’s pearl tiara, which the Princess of Wales received on her wedding day.

She also wore a navy Alexander McQueen gown, diamond earrings and some of the Queen’s silver necklaces.

Ms James added: “Kate wore the combination of a tiara; sash; some rather heavy-looking drop earrings; a stunning but also huge necklace, and a medal as though born to it.”