Bryony Gordon bagged the first interview where the Duke of Sussex revealed his mental health woes four years ago. The 41-year-old became an overnight sensation when the Prince revealed the trauma that his mother’s death left on him when he appeared on her podcast Mad World.

Ms Gordon, who has overcome an eating disorder and alcoholism, has since also formed a close bond with Harry’s wife Meghan.

Speaking to OK!, she revealed Meghan even asked her to take part in her 40×40 mentoring scheme – which aims to help women re-enter employment after the pandemic.

“I do a lot of mentoring anyway so it was a natural fit but actually I need a mentor. 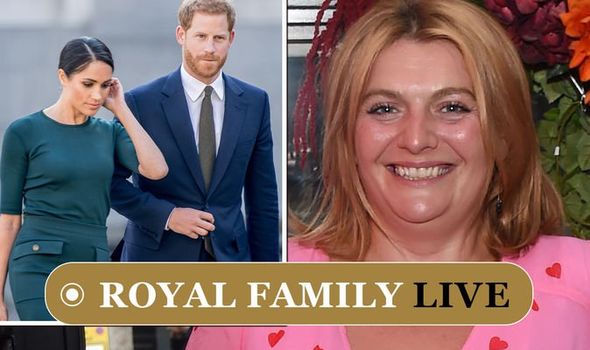 Follow our blog for the latest royal news (Image: GETTY)

“I’m in desperate need of some guidance, so I’m going to have to ask her to set me up with one (for the scheme).”

Since attending rehab in 2017, she enjoys a calmer chaos with husband Harry Wilson and their eight-year-old daughter Edie in south London.

Discussing her journey, she said: “I got really unwell for the first time when I was a child and we know that around 40 percent of people who experience mental illness in their lives will have experienced it by the time they turn 14.

“You can’t stop them from having that experience but you can let them know that if they do, it’s normal.”

She added: I get a lot of comments from people saying, ‘I wish I had your confidence’, but confidence is a trick.

“I don’t think it exists. We all have the same insecurities but I just don’t have the desire to waste any more of my life hating myself.

“It genuinely upsets me when friends say, ‘I wish I could just lose some weight’.

“I get that people do it for physical health, but a lot do it because they think they’ll be more valued as humans.

“Luckily, my daughter very much marches to the beat of her own drum. I’ve always taught her that exercise is about the gains, not the losses.”