Activists from Animal Rebellion carried placards reading “a royal blood bath” as they vandalised The Queen Victoria Memorial in front of the palace. They dyed the water red as part of their protest against animal hunting.

Extinction Rebellion spokesman Harley McDonald-Eckersall said: “The Crown Estate is the biggest landowner in the UK and they choose to use this land for animal agriculture and hunting, which not only decimate our environment but cause the deaths of millions of lives every year.

“It’s time for a new system based on justice and compassion and the Royal Family should be leading the way.”

The targetting of the Royal Family comes just days after Prince Charles made a rallying cry for action on climate change in a Daily Mail article.

The Met Police said they were at the scene outside the palace and arrests have been made. 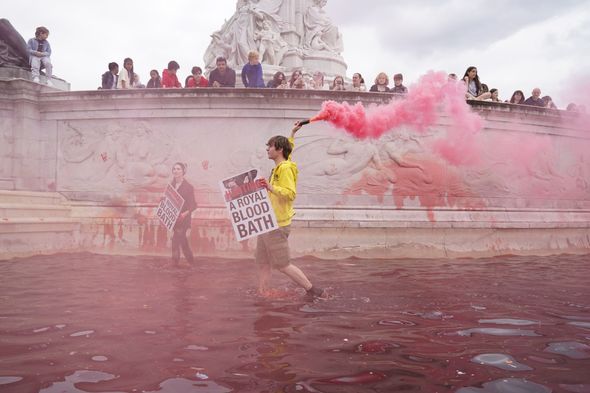 Activists dyed the water red as part of their protest against animal hunting (Image: PA)

The force tweeted: “A number of activists have vandalised the Victoria Memorial water feature outside Buckingham Palace.

“We are on scene and arrests have been made. The suspects are being taken to custody.”