Skip to content
Only 14 guests attended the private unveiling on July 1, with Kensington Palace describing it as a “small event and a very personal moment for the family”.

When the Duke of Sussex unveiled the statue to honour his mother, who passed away in 1997, Ms Fiorito saw him ask his aunts and uncle: “Can you see it from that far away?”

Ms Fiorito said in her podcast that she inspected the video footage from the event to make out what Prince Harry said.

“I did do a lip-reading of when Harry cups his hands over his mouth and he goes, ‘Can you see it from that far away?’ yelling to his aunts and uncle,” she said.

Ms Fiorito saw him ask his aunts and uncle: “Can you see it from that far away?” (Image: Getty) 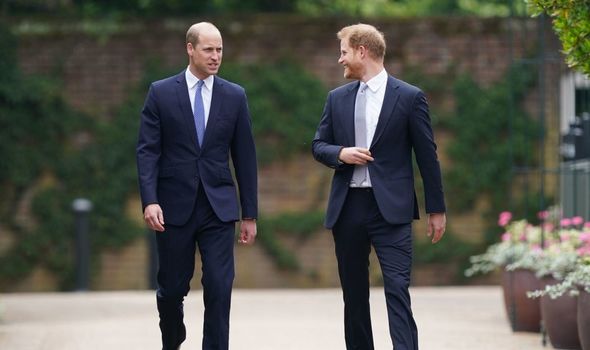 “I thought that was really funny.”

Ms Fiorito observed how relaxed the two brothers were together.

“I felt like it was the old Harry, where he seems really comfortable in his skin, really happy and genuine. And William seemed the same – they just seemed at ease with each other,” she said.

Prince William and Prince Harry shared jokes and laughed together. They were seen smiling as they officially unveiled the statue.

While the relationship between the Duke of Sussex and Duke of Cambridge remains distant, Ms Fiorito was excited to see Prince Harry with Diana’s siblings.

“Harry is so happy to see his aunts and uncles, which I thought was really cute. The proud-aunt moment from Lady Jane and Lady Sarah was just really sweet,” she said.

“It made me really think about what the influence of Charles Spencer, Sarah and Jane is on the brothers’ lives.

“They’re clearly so close and have a genuine affection and bond and I’m just curious what their influence has been on William and Harry’s relationship during the past year and a half…because they definitely are close.

“I do think there must have been some kind of conversation about baby Lilibet because there’s one point where one of his aunts puts both hands to her face, to her cheeks, and is smiling at Harry, and it’s like, ‘He just told her something about his new baby daughter that just makes her beam’. It was just so sweet to see them interact.”