“Prince William and his son were clearly very happy to be there in the stands. They were wearing matching ties in the colours of the Three Lions team.

“Also the Duchess of Cambridge wearing a beautiful white blazer and red earrings also in the colours of the English flag.

“George was wearing a lovely little navy suit. Apparently, there was a bit of a discussion between William and Kate over whether their son should wear the England jersey.

“Kate apparently won that argument and her son wore the suit to the game.” 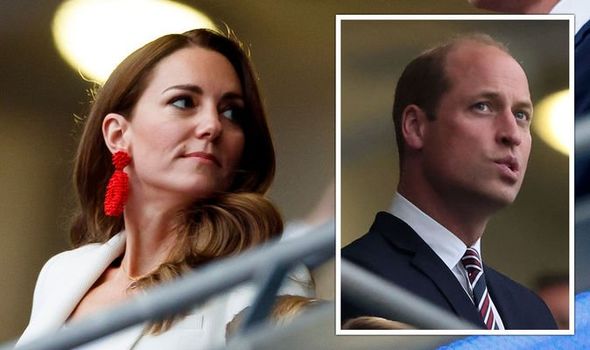 Kate Middleton was embroiled in an argument with Prince William ahead of Euro 2020 final (Image: GETTY) 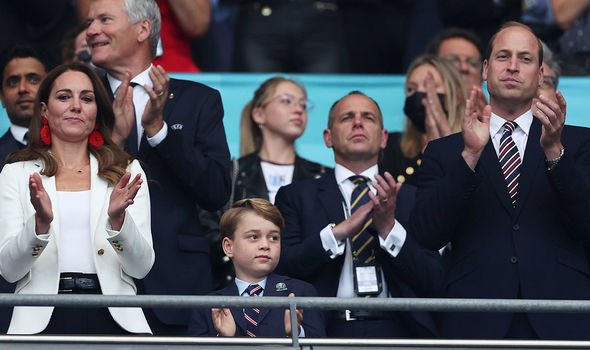 England’s hopes for Euro 2020 glory got off to a flying start with a goal just two minutes into the match, with Prince George among the ecstatic fans cheering the Three Lions at Wembley.

Roars reverberated around the London stadium as Luke Shaw hit the back of the net shortly after kick-off in the historic game.

The Duke and Duchess of Cambridge clapped after the lightning-fast goal, while George beamed with delight.

The game, which is also being watched by Prime Minister Boris Johnson and his wife Carrie, began after an RAF flypast and performance by the Coldstream Guards band as part of a tournament closing ceremony.

There were chaotic scenes in central London ahead of the match, with some fans even trying to force their way into Wembley Stadium as excitement at England’s historic Euro 2020 final reached fever pitch.

The Metropolitan Police said the force had been working with Wembley’s security staff.

“Earlier this afternoon there was a breach of security at Wembley Stadium, which resulted in a small number of people getting into the stadium without a ticket,” the force said.

“We will also support action by Wembley Stadium officials to identify those without tickets and eject them.”

Earlier, Wembley officials confirmed there had been “an incident” at the outer security perimeter area, after footage showed a crowd of supporters making a mad dash to get inside.

A spokesman for Wembley Stadium had earlier said there had been no security breaches of people getting in without tickets.

Fans in Leicester Square were seen throwing bottles and cones and the area was left littered with rubbish.